A Beer Chat with Simon Thorpe

“It’s a beautiful mess!” said Simon Thorpe, CEO of Brewery Ommegang, as he wrestled his way through the crowds at “Belgium Comes to Cooperstown”. BCTC is a three day camping beer festival held at Brewery Ommegang in upstate New York every August. The enthusiasm for this festival is evident when the $200.00 VIP tickets sold out in a mere 46 seconds. As with most beer fests, a non-VIP ticket holder would find over 50 breweries to drink from and numerous bands playing music throughout the event. What makes this festival unique is the juxtaposition of having high-end venues next to… well… typical beer fest venues. From fine dining Belgian beer dinners and Hop Chef gourmet pairing competitions to hundreds of patrons camped in tents around the brewery, BCTC looks like a mesh of a beautiful Sonoma vineyard with a large camping beer party. The brewery itself is designed to capture the grace and beauty of a Belgian style farmhouse on what used to be a hop farm. It is a romantic setting with fun, excitement, and high quality Belgian beer that makes actual Belgian brewers proud. In fact, the Knighthood of the Brewers’ Mash staff really are proud and have inducted Simon Thorpe to be knighted. We sat with Simon at BCTC to learn more about this honor, his background, and his vision for the future of Brewery Ommegang. 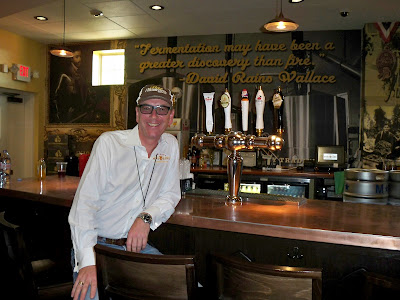 So tell us about the Knighthood of Belgian Brewers Induction:
I’m really quite humbled by it because I never expect these things. For me, I’ve got the dream job that every boy would ever want anyway and I get to run a beautiful brewery in upstate New York, in America, and it’s taken me 30 years to find my way here and for me to just be here is really special. To get on the b… well it’s totally unexpected you know. I mean I really didn’t…

So you didn’t lobby for it or there’s no application process?
Honestly, I was truly very humbled and I’d rather talk about my people, brewers, and I’d rather do that and in all honesty I am really humbled by it, it’s a beautiful thing.

Congratulations.
Thanks, yeah, Phil Lienart is the master brewer and he said the most important thing is on that day you get to wear the sash with the medal on it that allows you to get free beer at any bar in Brussels. So we’re planning to test out whether that really works. But it’s very serious, the academic ceremony goes back for hundreds of years to the mutual guild of brewers in Brussels and from that point of view it’s a great honor. There’s the academic installation in the morning where you meet and then go to the church for the blessing then you process through in robes and it’s fantastic, a great honor. Very wonderful. When you hear of a brewer and what kind of recognition could you have and well… the guild of brewers.

Well I’m curious, I know you don’t want to talk about yourself, but how does one go from InBev to getting knighted by the Belgians? I know that is a long winded question but…
It’s a very fair question. I’ve been very very fortunate to be in the right place at the right time in my career and, to me, my own career has been default rather than by design. It’s rare that I actually think more than about a week ahead. Some of the things that I’ve been fortunate to be a part of, in what was then Interbrew and became InBev and then became ABI they were… I was in the right place at the right time. In developing Stella Artois in Belgium I was fortunate to be a part of that. As the brewing industry had this cathartic heave and consolidation that happened over the 10 year period I happened to be in the right places. As we were here in North America and as China was exploding for international brewers I was lucky to be running an acquisition for InBev at that point. So I got involved in the acquiring of Chinese – big, big, BIG- Chinese breweries in developing and as well in Asia. As Eastern Europe developed the same thing applied and I was lucky to be, initially, developing some of the global brands like Becks and Stella. As InBev was looking at taking what had been a lot of regional brands and making them global power house brands so I’ve been very lucky, very lucky. And then when I left there and went into projects in Europe, went on to meet the Moortgat family. I tried to buy the Duvel market twice in my career and Duvel has always been my brand. For seven years I tried to buy the business and Michel would say ‘oh that’s interesting’ and ‘No we don’t need to do that, thank you’ and ‘oh that’s interesting evaluation of the company, I’ll make a note of that’. (When I was working for InBev, they would always come and say to me ‘well what breweries do you want us to buy in America’ and I would say ‘go back home to Belgium, buy Duvel Moortgat, and bring it back here to America’.) Finally, I managed to find myself at the door of Michel Moortgat’s office and he said ‘come around this US business’ and I jumped at it. So I say it was 30 years finding my road here and I am the least likely English boy to be in love with Cooperstown in upstate New York but it’s a dream.

So what’s the relationship with Duvel? Is it a situation where they allow Ommegang total freedom to experiment or are you somewhat restricted?
That’s a great question because if you look at the relationship in companies, it doesn’t matter if they are brewing companies or sub manufacturers. The relationship between the investors, the share holders, and the management is often one of the most critical things to a success or a failure of a business. We are, obviously, a family driven business. 25% of the stock is public, 75% is in the hands of the family. We are, I think, extraordinarily fortunate to have the type of family share holders that we do. They take a very very long term view. There are people that talk that, but very few people that walk that. So decisions about investments are very long term 50-100 year investment decisions, thinking long term on how to develop the brand. Michel is extraordinary. He is the younger of the three brothers. He is remarkably talented. As a family share holding they are more supportive than any other share holder group that I have ever worked with. Twice a year we have board meetings here in the US and every time they come they ask one question: “What can we do to help?” And that is pretty amazing. And sure, you have to be running a business properly for the share holders, developing brands in the right terms, maintaining top of the pyramid quality, that’s the philosophy that the Moortgat family has about all that. It’s a very simple recipe and it works if we stay on top of the quality pyramid for a long period of time and when we develop that reputation you are insulated from a lot of the ups and downs businesses have at times and it’s a remarkable relationship the way they choose to manage their legacy.

Did you always envision Ommegang being what it is now?
I’ve always believed that Duvel had the potential to be the next big high quality breakthrough in America. That’s the foundation. I’ve only been here three years and I think we’ve done really good things to develop it. The business here has doubled in three years. We’re on track to doubling it again in the next three. We focus very much on selective distribution. Frankly, I don’t care about being in the big volume beer bars. I want to be in high end hotels and restaurants. I want to be in the chi-chi bars of Los Angeles where the environment, the experience, the romance around what you are drinking is very exciting. We ask ourselves very often, how big is special? We will cap this business off at a certain quantity level if we thought that we were losing the specialness, the cache, of the brands. And again, there are a lot of people that talk that talk, it is very difficult to walk it. We’ve gone from basically 35,000 barrels to 75,000 barrels. Today, if you asked me how big is this going to be? That is about as big as it’s going to be. I think a lot of people are seduced by the notion of bigger is better. For us, special is better.

It sounds like that is the European influence since overseas everything is about quality vs. quantity?
It’s the Moortgat family. That is what they believe. We look at our margin pool of what we take, what our wholesalers take, what our retailers take. And part of our philosophy is we want everyone to make money. Some people put a lot of pressure on the wholeseller margin and the relationship falls apart. I want our wholesellers to be very happy with the money that they make on distributing our brands and similarly for retail. If everyone has been successful with our brands they will grow. We try to be the #1 or #2 most profitable brewery in their portfolio, if we do that then we’ll grow 30% a year – they will always take our calls.

We couldn’t agree more! Congratulations Simon and everyone at Brewery Ommegang! 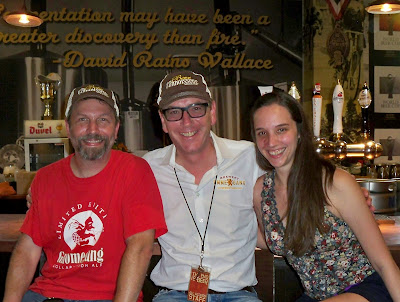 Check out our Facebook Page at www.facebook.com/SpreadingtheCraftBeerGospel  for more fun pictures of BCTC.