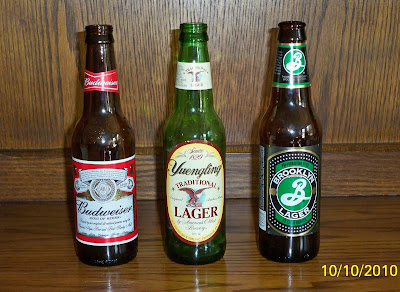 Little bit of setup for this, our first tasting review. In my teenage years of learning about "beer", my go to beer (and the same for most of my friends) was Budweiser. Revisiting this "classic" should be fun. Aimee's exposure consists of being offered numerous "Buds" by our wonderfully Southern neighbor. To him, everything else is a "girlie" beer. We've had Yuengling on numerous occasions, especially when visiting Pennsylvania friends. This is our first time trying out Brooklyn's lager.

Budweiser comes from St. Louis, MO, with Yuengling from Pottsville, PA and Brooklyn coming from Utica, NY. The alcohol contents are roughly the same, with Brooklyn coming in at 5.2%, Bud at 5% and Yuengling at 4.4%. Budweiser proudly proclaims their ingredients consist of "Choicest Hops, Rice (??), and best Barley Malt". Brooklyn states their brew is made of "Only with Malted Barley, Hops, Water and Yeast" (this is actually what beer is supposed to be made from). Yuengling doesn't say. What exactly are they hiding?? Now, when we think of beer, Rice does not come to mind, nor does hiding the ingredients. So, thus far, Brooklyn is looking good.

First up is Budweiser's Lager. It pours into our glass with a color similar to a white wine with a white foamy head. Looks like every description I've ever read or seen of what "beer" is supposed to look like. For me, the smell is similar to a grassy, grainy scent. Aimee proclaims "the smell reminds me of driving down the road and getting a whiff of a dead skunk". Nice. We both thought it was bubbly and smooth, however, I tasted malts and Aimee tasted "watered down grains". However we both agreed this might be a good beer if VERY cold and it's VERY hot outside. Even better with food to hide the "flavor".

Next is Yuengling's Traditional Lager, our middle of the road beer. The brewery is too small to be considered a macro, but a bit too large to be considered a micro. It pours into our glass with a color of copper or a dirty penny, with a foamy off-white head. We both agreed the scent was similar to creamed corn straight out of the can. The beer is not as bubbly as the Bud, with a malty flavor and slight grain. Just as smooth as the Bud, but also with more flavor and a slight bitterness at the end. We both agreed that this was a more drinkable and enjoyable beer than Budweiser. However, once they started to warm up, both brews exhibited that skunky smell and an off flavor.

Finally, onto Brooklyn's Lager, our craft brew for this session. It pours into our glass with an amber color and white foamy head. Visually, the most attractive of the three. We both agreed it had a wonderful scent of hops and pepper. The flavor has a solid malty base with just the right amount of non-bitter hops to make it smooth and refreshing. There is SO much more flavor in this beer with a light buttery flavor/texture just before swallowing. Unlike the other two, the appealing flavors and scent actually increased as it warmed up.

End result--if you're looking for a beer for a hot day or with pizza, and one you're not particularly interested in tasting, Budweiser might be the way to go. Yuengling, while more flavorful, seems to be cut from the same cloth as Budweiser, has to be cold (which of course dulls the sense of taste) and best drank quickly. On the other hand, Brooklyn's lager was a delight, full of flavor and almost encouraging you to let it warm up a bit to get the full effect. Brooklyn's Lager wins this session by a mile!

If you're interested in trying a beer for your sports needs or just for hanging out with friends, Brooklyn's Lager is one you can't go wrong with and can be found in the following states...