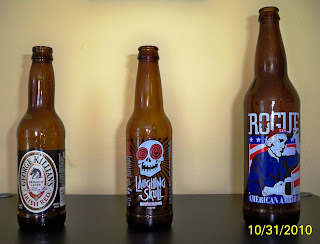 Our Macro review this week will be between George Killian's Irish Red, Red Brick Brewing's Laughing Skull, and Rogue's American Amber Ale. This might come as a surprise, but George Killian's "Irish" Red is actually a Coors brand. Coors does everything they can to hide that fact and if you look at the bottle the only clue is that it's brewed in Golden, Colorado. We wonder why they would go to all that trouble? Could it be they want you to think it's not a Macro? No ingredients listed or alcohol content on the bottle, although it comes in at 4.9%. Laughing Skull comes from Red Brick Brewing (formerly know as Atlanta Brewing Company) based here in Atlanta. Again, no ingredients or alcohol listed but it comes in at 5.7%. Last, but certainly not least, we have Rogue's American Amber Ale from Newport, Oregon which proudly displays ALL ingredients in great detail but no mention of alcohol and is actually 5.6%.

First up is Killian's which pours amber in color with a creamy white head. The aroma starts with the typical Macro lager smell but, oddly enough, has a bit of a stewed tomato scent at the end. Weird. Very bubbly on the tongue with a sweet malty flavor and finishing with a strange vegetable taste. Probably the best of the Macros we've had, so far. Next is Laughing Skull which has a cloudy straw color with a creamy white head. The smell is of sweet hops. We differed on our taste with this one. James thought that there was a lot of malt up front with a smooth balance, but once you swallowed it left a dry, bitter flavor in the mouth. Not a pleasant hoppy bitterness but more like an aspirin bitter. Aimee thought she really didn't taste any malt, just bitter hops, but again not in a good way- more of a pungent bitter with a funky aftertaste. Then we have Rogue's which pours a true amber in color with a tan head. The scent is all malt and the flavor is of caramel, bubbly on the tongue with a perfect balance between the hops and malt.

End Result--Rogue easily beat the other two, although we thought all three were rather dull. The Rogue is more of a "food" beer, not something that we'd enjoy just drinking by itself. The surprise this go-round was how much we didn't like the Laughing Skull, as we preferred Killian's flavor. That's it for this week's Macro vs. Micro tasting. Stay tuned for next weekend!
Be a Fan
Posted by James and Aimee at 3:13 PM