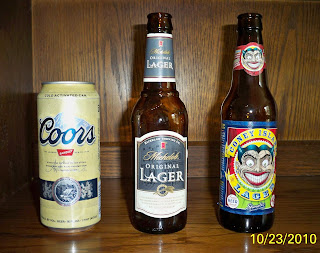 For this week's review, we're comparing Coors from Golden, Colorado, Michelob (Anheuser-Busch) from St. Louis, Missouri and Coney Island Lager from Shmaltz Brewing in Sarasota Springs, New York. Coors is heavily "trademarked' with a "cold-activated can", a "vented wide mouth" and a "frost brew liner". We won't bother commenting on those now, as the marketing gimmicks really have nothing to do with the flavor. The alcohol comes in at 5% and is "brewed with Rocky Mountain water". No other indication of ingredients. We're also having Michelob's "Original Lager" with no ingredients or alcohol listed. It also comes in at 5%. Finally, we have Coney Island Lager at 5.5% and noted to have 8 malts, 6 hops and a Czech pilsner yeast for ingredients.

We'll be having Coors out of the can as we couldn't find any bottles. That shouldn't be a problem since we're being helped along by the "cold-activated can", so we know it's cold enough and the "frost brew liner" to protect our flavor! The Coors pours out of the "vented wide mouth" into our glass with a color of gold, bubbly and with a white head. There's a sweet corn scent as in canned corn. It has a sweet corn and grain flavor with a slight bitterness at the end and no aftertaste. It washes down smooth and clean. Surprisingly, of the three Macros we've tasted (Bud, Miller, Coors), this is the best of those and not that readily available. Seems Coors Light is all anyone thinks of when Coors comes up. Next up is Michelob's Original Lager. Pours a golden color with a white fluffy head and very little carbonation. The scent is of the Budweiser variety (skunky) but a little less potent. The taste is a good balance of grains and malts (albeit, light on both in flavor) with a small amount of hoppy bitterness at the end. Finally, we have Coney Island Lager. The color in our glass is amber with an off-white head and a scent of sweet malt and candi sugar. The taste is LOADED with malts and a nice buttery, caramel flavor in the middle. It finishes with hoppy bitterness for a very well-rounded experience.

End result--Coney Island Lager was the easy winner here, beating the others in aroma, appearance and flavor. Coors was surprising as Aimee now prefers this over her beloved Miller High Life ponies! James found the Michelob to be the standout amongst the Macros so far, with Coors coming in next. If you're out and about and your ONLY options are Bud, Miller, Coors, pick either Michelob or Coors as the best of the bunch. Then again, that's only IF you can't find any Coney Island Lager, which can be found in the following states...California, Florida, Georgia,Illinois, Kansas, Maryland,Massachusetts, New Jersey,New York, North Carolina, Ohio,Tennessee, Washington. That concludes our comparisons of the Macros. What would you like us to review next? Blue Moon? Corona? Let us know and we'll get to tasting!
Be a Fan
Posted by James and Aimee at 4:20 PM