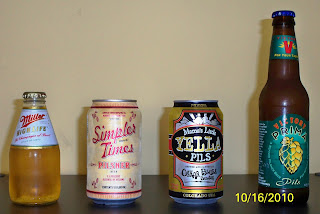 This time around, we're going to be comparing a macro beer that we still drink on occasion...Miller's High Life--"The Champagne of Beers". This is a great all around beer for just about anything--sports, eating, hanging out with friends. Aimee prefers these in "Pony" size, which are 7 ounce bottles. Still, this beer doesn't really have a whole lot of flavor, so, we hope to find something similar, but better. We'll be pitting this against a couple of canned beers--one is Simpler Times from Trader Joe's (a small grocery store that specializes in healthy foods), and the other is Oskar Blues Mama's Little Yella Pils. We'll also be tossing in Victory's Prima Pils for good measure.

Now, we know you're thinking 'canned beers?? That's supposed to be for cheap beer not pricey craft beer!' Well, as it turns out, there's a big movement among several craft breweries towards cans for a number of reasons. No light exposure to the beer (light is very bad for beer), easier for the consumer to carry out and about and more economical as far as recycling and transporting these to bottle shops. It so happens that Oskar Blues was the first to do this, but don't be surprised to see more craft beer coming in cans. Most people think that the can affects the flavor, but that's just not true, as the cans now have a liner, and the beer never touches the can.

Now back to our regularly scheduled review. A little background about our beers. Miller High Life is brewed in Milwaukee, Wisconsin and the alcohol level is 5%. No mention of the ingredients on the bottle. Simpler Times Pilsener is actually brewed by Minhas Brewery in Monroe, Wisconsin as a house brand for Trader Joe's. Alcohol comes in at 5.5% and again, no mention of ingredients. Oskar Blues' Mama's Little Yella Pils is from Longmont, Colorado with alcohol of 5.3% and no ingredients listed. Finally, we have Victory's Prima Pils from Downingtown, Pennsylvania with alcohol of 5.3% and ingredients listing "Whole flower European Hops and fine German Malts".

First up is the High Life. Pours into our glass a clear, golden color with a white head and VERY bubbly (it IS the Champagne of Beers!). The scent is a little musty, with a corn like smell (almost like Frito's Corn Chips). The taste is slightly malty, a little corny, bubbling on the tongue and refreshing. Aimee added this is a great "burping beer", especially if you're eating spicy foods and want to avoid the accompanying indigestion. Second in line is Simpler Times. It pours exactly like the High Life but with very little carbonation. It has a sweet straw or hay smell. We differed on what we tasted on this one. I tasted a malty flavor with a bitter finish that lingers, but not in a good way, almost like aspirin. Aimee's taste started slightly sour then changed to a very dry finish of grains or wheat. Every one's palate is different, that's why we're presenting both sides of this story! Next up is Mama's Little Yella Pils, which pours a hazy gold and a decent amount of bubbles with a cream colored head. The aroma is of faint hops (we're going to post on our Tasting tab exactly what this kind of reference means). The taste was a great balance of malt and hops but with a smooth finish with no bitterness at all. Finally, we're on to the Prima Pils, which pours a light yellow, cloudy, with a thick white head and barely any carbonation. Smells very floral because of the whole flower hops. The taste is SUPER floral and sweet with a slight, lingering bitterness to balance the sweetness. I thought it tasted like drinking perfume and it reminded Aimee of the Asian flower bulb teas that she's had in the past.


End Result--A bit of a surprise! Our favorite was the microbrew from Oskar Blues. A perfect lawn mowing beer--when you finish and just want to kick back and cool off. Tasty flavor and smooth drinking. The surprise is that Miller came in second. Another great beer for a hot day, but only if you like your beer without much flavor and pretty close to carbonated water. The High Life will serve a purpose. We'll avoid the Simpler Times Pilsener in the future, not much good to say about that. The second surprise came from our general dislike of the Prima Pils. We thought that would easily win, but it came in third place. Now, don't let that dissuade you from trying other Victory beers, as they do have some very good brews that you'll probably see in our Favorites list. Cheers!
Be a Fan
Posted by James and Aimee at 2:34 PM