It's freezing in GA! Part 2 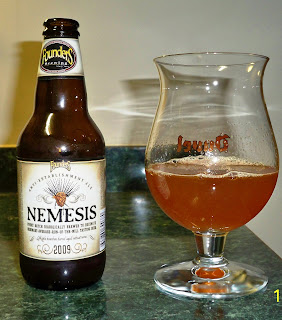 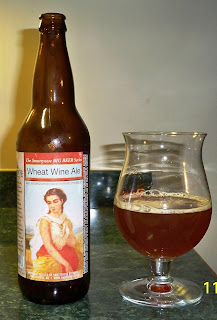 Also, in typical GA fashion, we've now swung back into the mid-seventies! However, this past Saturday night was even colder, so we decided to continue digging in the cellar to see what could warm us up. We found a bottle of Founder's Nemesis which, in 2009, was a Wheat Wine. It changes every year, but this was perfect for the night. Wheat Wines are similar to Friday's Barleywines except for having a large amount of wheat malt as opposed to barley malt. The second bottle we found was from Smuttynose titled simply Wheat Wine Ale. This bottle was also from 2009. Nemesis comes in at 12% and Smuttynose at 10.7%.
Nemesis pours into our glass with practically no head, an orange-gold color, and opaque with a few yeast floaties. As we expected, this beer (having been aged in maple bourbon barrels) has that strong alcohol/bourbon aroma but ends with a scent of macaroons? Sometimes, it's hard to place a particular smell, so you just do your best. The taste was very sweet, but with a strong alcohol presence, much like a liqueur with that smooth, velvety finish, but without that burn. Also very lively on the tongue, which was a pleasant surprise.
Smuttynose also pours with minimal head and orange-amber color. The scent is all malt at first but there seems to be a slightly bitter, citrus hops undertone. The first thing we tasted was sweet, malty, buttery goodness, but this followed with an alcohol finish that helped to balance out the sweetness and prevent it from being cloying. This beer reminds us of fall--you can taste the crisp air and see the autumn colors. However, we still liked the Nemesis better with that wonderful maple bourbon flavor.


Of course, you can't go wrong with either!
Be a Fan
Posted by James and Aimee at 8:38 PM