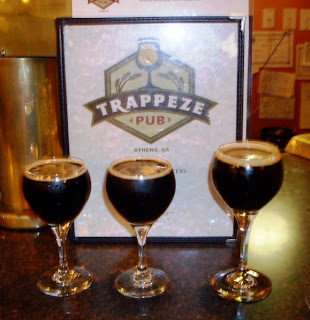 Last night, we had the pleasure of visiting Athen's premiere beer bar, Trappeze, during their Stout Fest. Upon entering, we were told by the hostess that they were so busy we'd have to wait for a table. We just wanted to sit at the bar anyway, so no worries. Once we sat down, the quick and attentive staff got us set with our first sample of the night, a couple of 1/2 pours (we love the 1/2 pours, as you can sample more without breaking the bank!) from the special cask they had tapped for the evening, Terrapin's Moo-Hoo Chocolate Milk Stout. We're not going to review any of the beers here as tasting in a public atmosphere can be problematic. Aimee decided to get a flight of one of her favorites from Terrapin--the Wake-N-Bake Coffee Oatmeal Imperial Stout. The flight consisted of a sample of vintage 2008, an oak-aged vintage 2008 and the new 2010. James proceeded with Bell's Expedition Stout (one of his favorites), followed by Southern Tier's Oat Imperial Oatmeal Stout. We then decided to order some cheese and picked a three cheese plate. Beautifully garnished with a mix of fruits and nuts and completed with toasted bread and bruschetta. 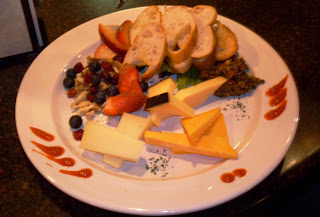 Next up came De Molen's Disputin (name changed from Rasputin due to legal issues) Russian Imperial Stout, followed by Bell's Special Double Cream Stout. Last pour of the evening was Brooklyn's Black Chocolate Stout. Now, you might be saying to yourself 'Wow! That's alotta beer and probably expensive, too!' Not the case. Half pours are where it's at if you want to sample several beers without getting hammered and keep your tab fairly inexpensive. We're not going to go into the final amount but we will say that after sampling 10 different beers and the wonderful three cheese plate, we were impressed with how much it didn't cost! Do yourself a favor and stop by today for the last day of Stout Fest. If you can't make it today, put Trappeze Pub as a destination on your next visit to Athens!
Be a Fan
Posted by James and Aimee at 11:58 AM