It's freezing in GA! 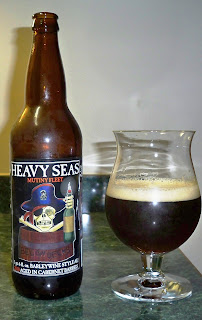 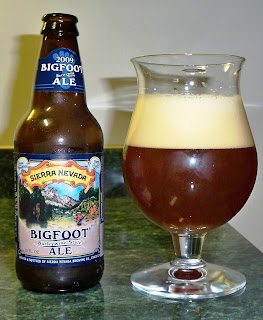 Per usual, we've had our couple weeks of fall (spring's the same way) and now we've headed right into winter. The nights are already supposed to be below freezing this weekend! So we decided to pull out a couple high alcohol beers to help warm us up. We've got Heavy Seas' Below Decks Barleywine (aged in Cabernet barrels) and Sierra Nevada's Bigfoot Barleywine. Below Decks comes in at 10% ABV (alcohol by volume) and Bigfoot is 9.6% ABV. We found a bottle of the Bigfoot with a 2009 date so it's had time to age a bit. First, we'll have the Below Decks. It pours a reddish brown color with a cream head. Nice aroma of red wine (from the cabernet barrel) and malt. The flavor is wonderful, sort of a dry red wine but changes to a caramel malty flavor to balance it out. We really like this one! Below Decks is more of an English Barleywine, so it's not very hoppy, unlike the American Barleywine, which is what we're about to try with the Bigfoot. Bigfoot pours a ruddy brown color with a tannish thick head. The aroma is hops with a malt finish. Oddly enough, very malty with a Belgian candi sugar flavor to it that finishes with a sharp, hoppy bite. It goes from being extremely sweet to very bitter all in the same taste. Seems the age has mellowed out the hops a bit and brought the sweet malts up front. However, it's still hoppy, making us wonder what it would taste like fresh! Of the two, we preferred the Below Decks but the Bigfoot was a pleasant surprise and we'll have to get a fresh bottle to see what it's like. Oh, almost forgot to mention, we achieved our goal of warming up nicely!