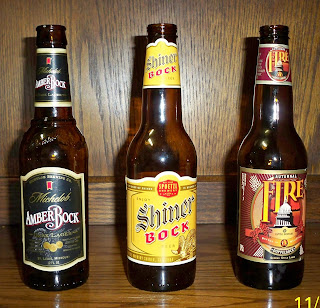 For our next Macro vs. Micro review we have one that has been requested by multiple people, namely Michelob's Amber Bock. Bocks are not very easy to find as we discovered while shopping for the review so we have two bocks and a doppelbock (or double bock), which is basically very similar but twice the strength. First up, we have Anheuser-Busch's Michelob Amber Bock from St. Louis, Missouri. No real mention of ingredients or ABV but it comes in at 5.2%. Pours a mahogany color with a big 3-finger creamy head. Looks very nice. However, the aroma quickly tells us that we're going to be tasting a Macro. Same sort of bitter beery scent. Hard to really describe but all Macros seem to have this in common from the adjuncts used in the brewing process. The mouthfeel is thin and carbonated. The taste is sort of veggie with just a hint of caramel in the aftertaste. Probably the best of the Macros we've tried but that's really not saying much. Not a whole lot in the flavor department at all.

Next up we have Shiner Bock from Spoetzl Brewery in Shiner, Texas. Once again, no ingredients or ABV but this one is at 4.4%. Pours mahogany in color with a 1 finger cream head. The scent is veggie with sweet malt. This one tastes a little sweeter with a fuller body than the Amber Bock, but really not that much different.

Finally, we have Capital Brewery's Autumnal Fire doppelbock from Middleton, Wisconsin. No ingredients but listed as 7.8% ABV on the bottle. Like we said earlier, this one will be much stronger than a standard bock. The appearance is dark amber in color with small tan head. The smell is seriously veggie here with strong malts in the end. We differed in our review here so...upon his first taste, James said "that's good!" A nice slick mouthfeel with slight hoppy bitterness but overall well balanced between the malts and hops. The malts are still very prominent as they should be, but the hops keep the whole thing from becoming too sweet. Aimee really liked the mouthfeel and found the flavor super veggie and malty but with a hoppy bitterness that sneaks in the middle but finishes veggie.

END RESULT--While Michelob's Amber Bock is ok, you would be doing yourself a favor by checking out what other beers might be out there in a similar vein. The Shiner Bock is a step up and we'd take that over the Michelob. However, if you want a prime example of what a bock could and should be, check out Autumnal Fire from Capital Brewery- the easy winner in this round.
Be a Fan
Posted by James and Aimee at 2:00 PM