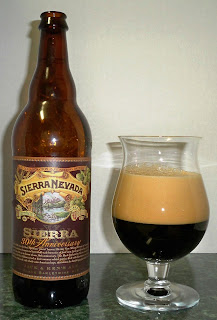 From Sierra Nevada, (out of Chico, California) for their 30th Anniversary series, comes Jack (McAuliffe) and Ken's (Grossman) Ale. An American Barleywine, this comes in at 10.2% and is a collaboration between Ken of Sierra Nevada and Jack of (now defunct) New Albion Brewery. On a side note, Jack is considered to be the first American micro brewer. Pours black (they call this a Black Barleywine) with a thick 3-finger mocha head with a creamy texture. Very faint aroma of roasted malts and hops. This was one that we each had a completely different taste experience. James-very malty with bitter hops at the end. Aimee-mostly hoppy without much malt. How these things happen is beyond us!

We gave this 3.5 out of 5 stars as it was tasty but not really as outstanding as we had hoped given the occasion and collaborative effort.
Be a Fan
Posted by James and Aimee at 2:17 PM